I remember when we were kids and we’d watch scary movies with our mom. Back then, they weren’t the in-your-face gory kind that seem to be popular now. It was all about letting your imagination do the work. Like what could happen if the girl goes down that dark hallway. Sometimes it did happen, sometimes not, which just made the suspense worse. It was during those moments when my mom would purposely let out a scream and scare the bejeebers out of us. She always thought it was so funny and after we got through being scared, we did too. We’d all laugh at each other about how high we jumped and who was more scared. Sometimes when we got a little older we’d turn the tables on Mom and scare the crap out of her.

I don’t watch scary movies hardly at all anymore. Hubs doesn’t like them and I don’t care for the excessive slasher style that’s popular now.  I do remember when I was younger, watching some of the more “modern classic” ones like “Friday the 13th”. I saw the original “Carrie” in the theater. Also saw the original “Halloween” in the theater and had to go home by myself to a dark house. I stood at the door for at least 15 minutes trying to find the guts to just open it & turn on the lights. I just knew that if I reached my hand inside that doorway to flip on the lights that I’d be grabbed by Michael. And I was in my 20’s at the time.

The mind is a powerful thing. That’s why I don’t understand these current movies. They don’t enlighten me. They’re so predictable. The next person left alone is dead meat. Literally. If you go into the woods you won’t be coming back. It seems like the blood & gore is the point and not the suspense or fear. Clearly it’s easier to set up a kill scene than it is to actually plan something out to scare people.

I think the last modern horror film I saw was “The Conjuring”. It was better than most and had that intelligent writing that led your imagination into the dark. (We sort of have to watch a horror flick every time we go to our annual Halloween party.)

I know, I know. The old movies can be pretty cheesy and not scary at all anymore. Now they’re just fun to watch for that very reason, and to remember how scared we were the first time we saw them. As a kid I used to have sleep-overs at my friend’s house or vice-versa and we’d stay up for the midnight scary movie. We totally loved the Peter Cushing/Christopher Lee movies. The Skull, The Creeping Flesh, The House That Dripped Blood to name a few.

I remember “The Skull” being so scary and now I laugh when I see the wires on the prop. Vincent Price has always been a favorite as well. Such a cool dude. 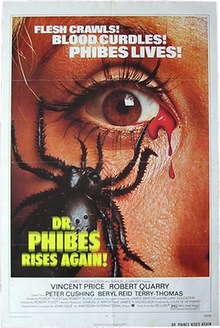 For me it’s not the scare value now but the memories that go with those movies that have so much more value that make them worth watching again.

One thought on “Scary”

Sprawly by Carabiensplash is licensed under a Creative Commons Attribution-NonCommercial-NoDerivatives 4.0 International License.
Based on a work at https://sprawly.wordpress.com/.