I have a Proclivity  to watch the movie “Battleship”. I don’t know why and can’t explain it, but I’m compulsed to watch it whenever I come across it on the TV. Which happens fairly often. I can’t even count how many times I’ve watched that movie. I watched it when I was in the hospital. It was a highlight when I was there for a week. It just randomly showed up on the guide and there you go. Hubs has even been conditioned toward the fact that if we come across it, it will be on for the duration. Sometimes it’s in the middle of the movie, sometimes it’s at the beginning. Doesn’t matter. Grab a snack. 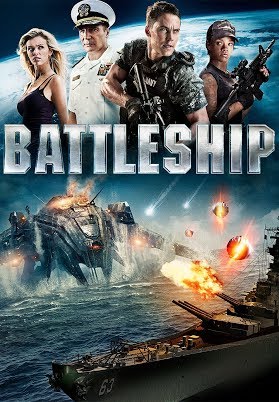 Is it the best movie ever? No. Some people think it’s pretty crappy. I’m not one of those people. Clearly I find it quite entertaining.  Is it realistic? Of course not. Am I watching it for a particular character/actor? Nope. I still have trouble remembering the main guy’s real name. (Taylor Kitsch?) I get him confused with someone else. The girl is pretty, but I don’t know what her name is. I like it because it’s got action, fun special effects, great humor and they actually show the aliens. I also like the fact that they used some actual war veterans in the movie.

I think I might’ve gotten it on DVD, finally. But I’m not prone to watch it on DVD. Just when it’s on TV. So it’s not like I’m sitting on the couch with glazed eyeballs in a hypnotic state, watching this movie on continuous repeat. But I do have a proclivity to watch it.