Since I used to raise Arabian horses, there’s no way I could see anything but the beautiful bay stallion *Bask++, when I see this word. I’m guessing it’s that way for anyone that knows Arabian horses. *Bask++ is instantly recognized.

Let me start at the top with just his name- Bask. It’s pronounced “bahsk”, not bask, with a short ‘a’.  The asterisk in front of his name notes that he was imported to the U.S. The plus signs behind his name are merit awards that he earned in the show ring.

He was a Polish bred horse that was born in Poland in 1956. I won’t get into the different types/strains of Arabians as it can get super complicated. He was imported to the United States by Dr. Eugene LaCroix of Lasma Arabians in 1963. 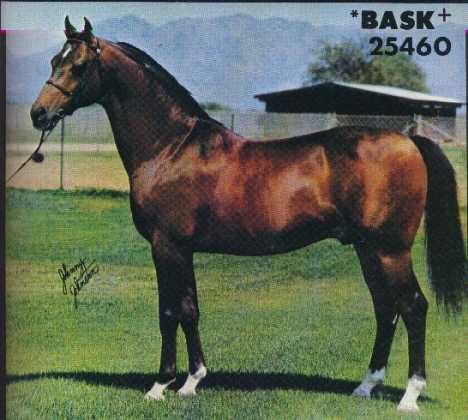 In Poland at the time it was common to send 3 yr old Arabians out to race . *Bask wasn’t evaluated for breeding stock until he was 6. Since the Janow Podlaski Stud already had several of his brothers at stud, they were willing to sell *Bask. He was actually scheduled to be gelded when he came back from the track. Luckily Lasma Arabians bought him before that happened. He became one of the most significant horses in the Arabian breed. He sired over 1,000 foals, (most before artificial insemination was common) and his influence on the breed was to say the least- impressive. Not a bad return for the $3,000 they paid for him.

He was a star in the show ring as well and earned many, many championships. Hence the ++ after his name which denotes the level of Legion of Merit. He was gorgeous, had excellent conformation and could move like a dream. There wasn’t much he didn’t excel at. 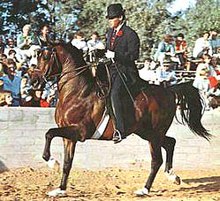 ( most of this information comes from *Bask’s Wikipedia page)