Ok. This is a spinoff from a challenge that I’ve been participating in called Color Your World from Jennifer Nichole Wells. It’s a ton of fun!

Anyway, one of the colors was called Tumbleweed and that name always reminds me of the 1953 movie by the same name. I wrote about it in my submission for the color  Tumbleweed. This got me to thinking about various horses in movies that weren’t necessarily about the horse. In my admittedly biased opinion, they either stole the show or  at the very least grabbed my attention.  I have to confess here that I’m one of those people that always looks at and analyzes the horses in movies. If you’re a horse person, it’s what you do. It’s interesting to see how many different horses they use for supposedly one horse. Or how many times they use the same horse in different scenes as a different horse. (Wait! Didn’t that horse die in battle a few scenes back??) But I digress.

The horse in the movie Tumbleweed  was named Tumbleweed, but the movie was suppose to be more about the humans. There’s no image of the horse on the movie poster. He was a scrawny little Mustang that everyone misjudged because of his appearance. For me, it was all about him, although I love Audie Murphy. How could you not?

There’s an old movie called Lonely Are The Brave released in 1962 with Kirk Douglas as the star. It’s a fantastic movie but tear-jerker and I’ve only watched it once. It’s on my DVR as I write this and I haven’t gotten the courage up to watch it again, yet. It’s said that it is Kirk Douglas’ favorite movie. The horse is a supporting character named Whiskey. He’s a gorgeous liver flaxen color.

Another favorite is the horse Clint Eastwood uses in The Outlaw Josey Wales. That horse is the bomb! I couldn’t really find any information on him. Clint has had a few stunners in his movies. The Paso Finos in his spaghetti westerns. The dappled greys in both High Plains Drifter

I had wondered for a while if maybe they were the same horse, since I hadn’t gotten to compare them. They are not. But both are incredible.

Then there’s the horse that Kurt Russel rides in Tombstone. At least with that one,  I found out that he’s a Hancock-bred (a foundation bloodline) horse named Sunday Homespun. That’s about all the information I could find on him. Apparently he was quite a sweetheart from the looks of this photo. Still a stallion, but being ridden by two little girls in a bosal. Good looks AND brains! Sweet!

One of my favorites is The Man From Snowy River. Not exactly about the horse, Denny, that Jim Craig rides, but he steals the show with that one famous scene. The sequel is good too, but lacks that certain something that the first one has.

The 13th Warrior has a short little part with a little Arabian horse that’s pretty cool.

The movie Ladyhawke has a luscious Friesian ridden by Rutger Hauer. If I’m not mistaken, the Friesian is named Goliath in real life. There’s also an incredible grey Andalusian used in the fight scene. 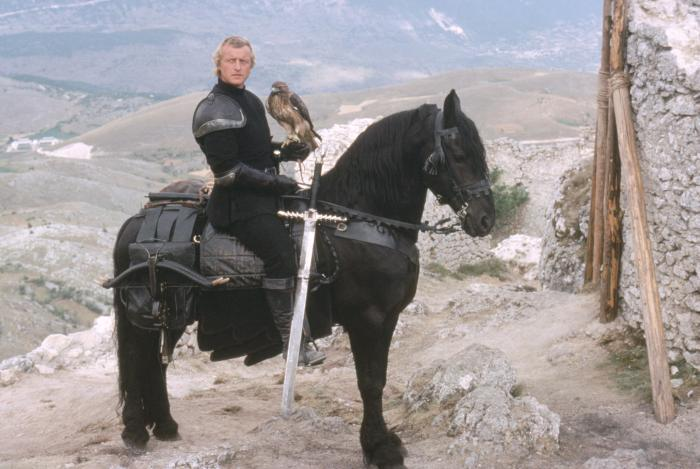 The Mask of Zorro also has a beautiful Friesian.

John Wayne has had some nice horses in his movies too. The sorrel that he rides in True Grit that he calls Bo is pretty nice. He also rides a very loudly colored Appaloosa in El Dorado. Of course there are the movies that ARE about the horse. The first one that comes to mind is The Black Stallion (and subsequent sequels). They used a lot of different horses for the one main horse. The main horse was Cass Ole`, an Arabian stallion. He had some white markings that they had to dye for the movie.

Also Secretariat, Seabiscuit and Phar Lap. More recently is the movie Snowman, which I haven’t seen yet, although I’ve read the book.

Winter’s Tale has a really nice horse as a supporting character.There are many more, but these are a few that come to mind.

Are you an equineophile (yes, I just made that up) too? Can you think of other movies where the horse steals the attention from the humans?

Oh, and as a side note, barely related…. I really hate it when I’m watching an equestrian competition like show jumping or horse racing and all they talk about is how great the rider is. No disrespect to the riders,(I know it’s hard work) but the horse is the one doing most of the work and being the athlete while carrying a rider. All I’m saying is give the horse the credit he’s due.